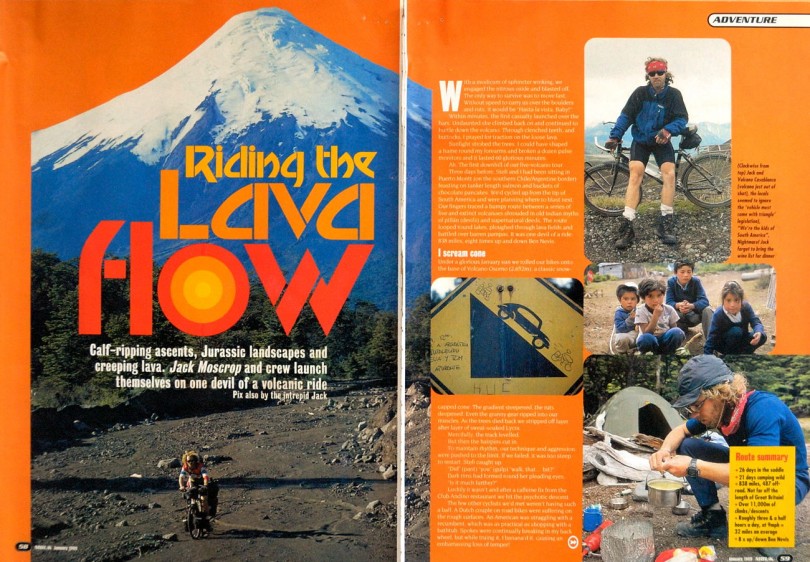 Events on the way to Bariloche made broken spokes to pale into insignificance. We found a wild, isolated camp, hidden from the road. It was deathly quiet, until midnight, when I awoke startled. I heard a distant roaring V8. I was confused, that wouldn’t have woken me. It stopped, still a good distance away. Then I heard the thuds. Gunshots. The V8 accelerated closer, and almost drove over us. The 4×4 braked hard and powerful spotlights illuminated our tent. Drunken laughter pierced the night. I held Stefi down, and froze, scared to even breath until the V8 restarted, drove away and the drunken laughter faded.

In the morning the track took on a fast and furious BMX style, which we were happy to oblige. Volcano Tronodor came into view, an imperious twin-peaked black rock, ruffled with hanging glaciers, rising unopposed from the lush fields.

We arrived at the base only to find it was impossible to ride even half-way up. Resting on the grass amongst picnickers from Bariloche, we discussed whether to continue that day. A couple of girls asked Stefi if we were ‘Sons of the flowers’ and offered us fruit. We realized we’d been staring at their food for some time. Unfortunately the same trick didn’t work with a group spit-roasting a chicken.

The fruit triggered both our sweet-teeth and we headed towards San Carlos de Bariloche and its artisan chocolate makers. A few pounds of cacao soon made the Tronodor failure insignificant. The Paso de Mamuil Malal, in the shadow of Volcano Lanin was important. It was the way back into Chile. We couldn’t afford to fail.

No More Chocolate in Bariloche

The immense pampas landscape swallowed us. Huge stretches of sand and gravel were pockmarked with tough ground-hugging bushes. Dry river beds pushed the dirt road sharply up and down. The sky pulsed purple and black.

Pilláns sent strong headwinds and kicked up the sandy surface. Was the locals’ reverence of these devilish spirit something to be taken more seriously? I began to feel uneasy. We delved deep into hidden reserves until we had to stop and eat in the dust. Our skin crawled with ants and the sun scorched deep into our aching muscles cutting short our break.

We were exhausted by the time we asked a suspicious gaucho if we could camp next to his river. Thankfully he said yes. Adventure cycling was taking its toll.

The night emptied the sky of rain and in the morning Volcano Lanin emerged on the horizon. The sun glinted off its iced flanks and it rose like a blade as we rode closer. Cycling was the only way to be here, facing the challenge, allowing time to absorb the peak’s magic.

The magic carried us over the pass and onto one of the best descents of the trip. Stefi let loose and I followed her. The sound of rattling chains and squealing brakes echoed through the woods. Then Stefi decided to stop braking. We hit 40mph, fully loaded on a sand road. Her bike moved closer and closer to the edge. She banked further into the corner but it wasn’t enough to stall her drift. Braking was no longer an option at her speed and angle on this surface. She had nowhere to go except over the edge. The bank grabbed at her wheels. A plume of dust hit my face and blinded me.

I wiped my shades and miraculously she was back ‘safely’ in the middle of the road. My speed-addled mind registered peripheral movement. Frantic Chilean customs officers waved their arms at us. We’d made it. Success at last. Well, until they wanted to know if we are carrying any fruit or veg. We lied. They started opening panniers. We started sweating. Luckily they got bored quickly, and we crossed the border childishly excited at being international carrot smugglers.

You never know what you might become when you take a risk and try some adventure cycling.