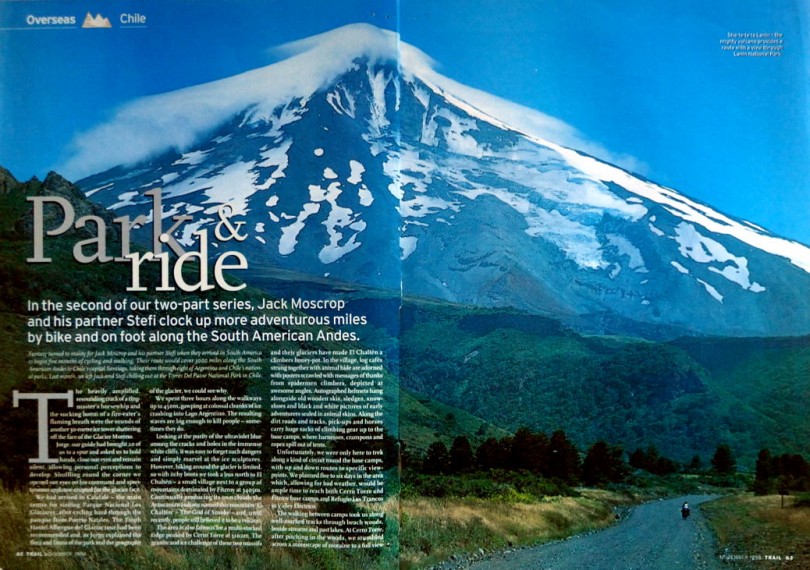 Adventure Sports In a Gas Mask

We were practically knocking on the devil’s door and the guide was faffing around, talking into his radio and checking out conditions at the crater.

It had taken us five hours to reach this point, 100m below the 2840m summit of Villarrica Volcano – originally named ‘Rucapillán – the Devil’s House’ by the indigenous people.

At last the radio was pocketed and we awkwardly moved up the brittle lava cone. Our plastic boots felt much better in the snow we walked through most of the way up. We hadn’t needed our crampons, although some sections had been steep enough to make the ice axe reassuring.

Boots clattering and axis chinking, we breached the cone & spluttered in the sulphurous smoke. After a few minutes ‘machoing’ it out, my eyes and nose were stinging and I became nauseous. So, along with the others, I started sucking hard into the gas mask.

Desperate to see some molten lava, Stefi was hanging over a cliff edge. Close by a musician in the group was attempting to record the volcano’s voice the future sampling. It was a surreal scene amongst the drifting green smoke.

Walking around the cone, we could see 200km of forests, lakes, lava fields, and stretches of corn, between seven snow streaked volcanoes (Tronador, Osorno, Lanin, Choshuenco, Llaima, Lonquimay and Quetrupillán) all still active except for Tronador and Quetrupillán.

Villarrica Volcano is Not For Everyone

Conquering Villarrica Volcano had not been a technical battle for me and Stefi. However people do die, or are injured on the climb from falls, heart and asthma attacks. For inexperienced walkers, it isn’t quite the walk in the park that the tour agencies bill it as; one member of our group found it particularly crippling. Every time we took a step forward, she took one back. In the beginning the guide was patient, but every time we stopped to let her catch up, her rest time shortened. Having spent many hours skiing with people of far greater ability, I knew exactly what it felt like to catch up with the waiting group only to hear, “Vamos . . . lets go”.

As our descent began I knew it would be my turn to suffer and the usual knee and back wrenching. But I was spared. As soon as we reached the snow, the guide searched the ground, found a snow chute and invited us to, “Sit down please”. Carefree in our rented over-trousers we slide down 1500m on our backsides. The guide entertained us staying on his feet, using his ice axe handle as a stabiliser. A fine spectacle to finish a fun day doing adventure sports, as long as you’re fit enough.