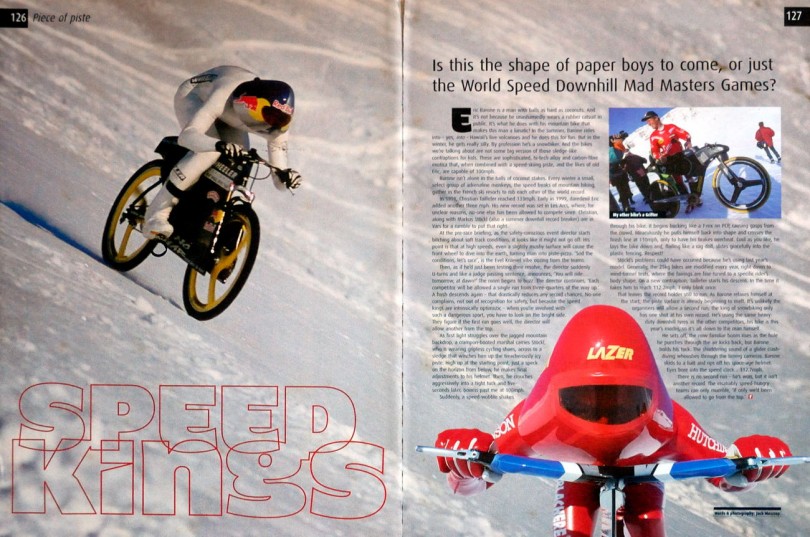 In the summer, Eric Barone rides into – yes into – Hawaii’s live volcanoes. But that’s only for fun. In the winter he gets really serious riding his high-tech alloy and carbon fibre bike down speed skiing pistes at over 130mph, which is faster than freefall terminal velocity.

Barone isn’t alone in his madness. Every winter a group of mountain bike speed freaks gather in French we ski resorts to rob each other the world record. In 1998, Christian Taillefer reached 133 mph. Early in 1999, Eric added another 3 mph. This year, Marcus Stockl is also along for the ride.

At the pre-race briefing, the safety conscious event director starts bitching about soft track conditions. He says at these speeds, even a slightly mushy surface will cause the front wheel to nose dive, turning man into piste-pizza. “Sod the conditions, let’s race”, is vibe oozing from the teams.

Then, as if he’d just been testing their resolve, the director suddenly U-turns and announces, “You will ride tomorrow, at dawn”. The room begins to buzz. The director continues, “Each competitor will be allowed a single run from three quarters of the way up”. Hush descends again – that drastically reduces any record chances. But no-one complains, not out of recognition for safety, but because the speed kings are intrinsically optimistic – when you are involved in such a dangerous sport, you have to look on the bright side. They figure if the first run goes well, the director will allow another from the top.

Can They Break The Downhill Mountain Bike World Record On a Short Track?

As first light peeps over a jagged mountain backdrop, a crampon booted marshal carries Stockl, who is wearing gripless cycling shoes, across to the sledge which winches him up the treacherously icy piste. High up at the starting point, just a speck on the horizon from below, he makes final adjustments to his helmet. Then, he crouches aggressively into a tight tuck and five seconds later, booms past me at 100 mph.

Suddenly, a speed wobble shakes through his bike. It begins bucking, causing gasp from the crowd. Stockl pulls himself back into shape and crosses the finish line at 110mph only to have his brakes overheat. Cool as you like, he lays the bike down and rag-dolls into the safety fencing.

Stockl’s problem could have occurred because he’s using last year’s model. Generally, the 25kg bikes are modified every year, including wind tunnel tests, to fine tune the fairings to specific riders. On this years model, Taillefer starts his dissent. I only blink once in the time it takes him to reach 112.2 mph.

That leaves the record holder to run. Barone relaxes at the start, the piste surface is already beginning to melt. Is unlikely the organisers will allow second run; the King of Snow biking only has one shot his own record. He’s using the same heavy duty downhill tyres as the other competitors, his bike is this year’s model, so it’s all down to the man himself.

He sets off, the now familiar boom rises as the hole he punches through the air resists his onslaught. Barone holds his tuck and whooshes through the timing cameras, skids to a halt and rips off his space age helmet.

He’s won, but it isn’t another record. The the downhill mountain bike record seeking teams can only mumble, “If only we’d been allowed to go from the top”.