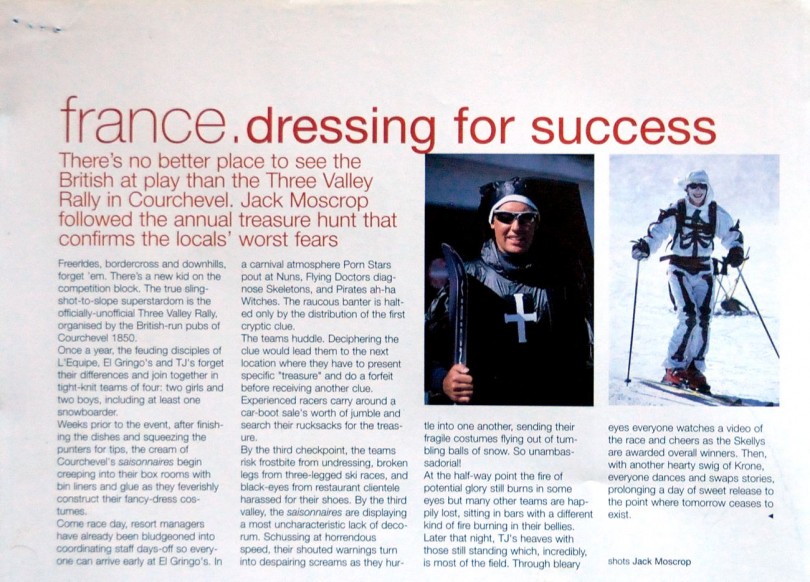 “Dressing For Success” published in Fall Line.Chalet hosts go all out with their fancy dress themes for the Three Valley Rally, Courchevel 1850, France.

The Race To Be Seen In

Freeriders, boardercross and downhills, forget them. There’s a new kid on the competition block. The true slingshot-to-stardom is the officially-unofficial Three Valley Rally, organised by the British run pubs of Courchevel 1850.

Once a year, the feuding disciples of the L’Equipe, El Gringos and DJs forget their differences and join together in tight-knit teams of four; two girls and two boys, including at least one snowboard.
Weeks prior to the event, after finishing the dishes and squeezing the punters for tips, the cream of Courchevel’s saisonnaires creep into their box rooms with bin liners and glue as they feverishly construct fancy-dress costumes.

Come race day, resort managers have been bludgeoned into coordinating staff days off so everyone can arrive early at El Gringos. In a carnival atmosphere porn-stars powt at nuns, flying doctors diagnose skeletons, and pirates aha witches. The raucous banter is halted only by the distribution of the first cryptic clue. The teams huddle. Deciphering the clue will lead them to the next location where they have to present specific “treasure” and do a forfeit before receiving another clue.

By the third Valley, the saisonnaires are displaying a most uncharacteristic lack of decorum. Shushing a horrendous speed, the shouted warnings turn into despairing screams as they hurtle into one another, sending their fragile costumes flying out of tumbling balls of snow. So unambassadorial.

At the halfway point the fire of potential glory still burns in some eyes but many other teams are happily lost, sitting in bars with a different kind of fire burning in their bellies.

Later that night, TJ’s heaves with those still standing which, incredibly, is most the field. Through bleary eyes everyone watches a video of the race and cheers as the skellies are awarded overall winners. Then, with another hearty swing swig of Krone, everyone dances and swaps stories, prolonging a day of sweet release to the point where tomorrow ceases to exist.