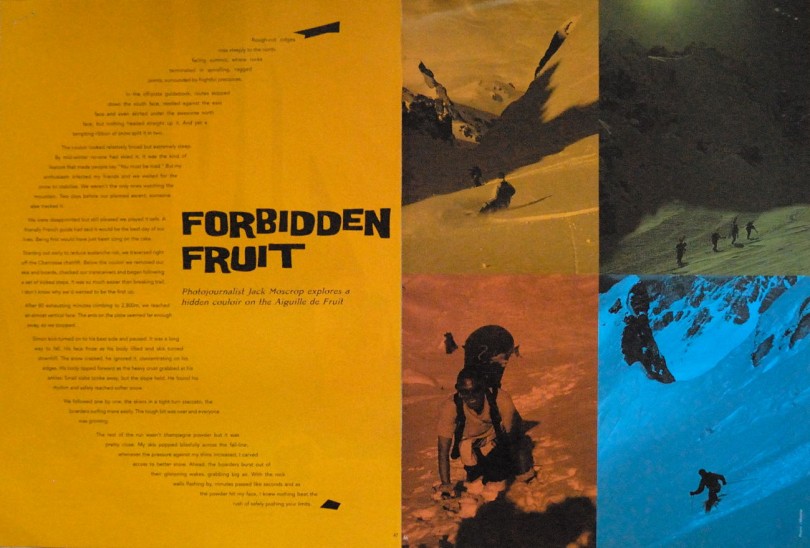 “Forbidden Fruit” Published In Ski and Board. When you think of French ski resorts, Courchevel 1850 is not the first to come to mind for off-piste skiing. Don’t be fooled, there’s plenty on offer and the Aiguille de Fruit is a rarely skied gem.

Rough-cut ridges rose steeply to the north-facing summit, where rocks terminated in spiraling, ragged points, surrounded by frightful precipices.
In the off-piste guidebook, routes skipped down the south-face, nestled against the east-face an even skirted under the awesome north-face, but nothing headed straight up it. And yet a tempting ribbon of the snow split it in two.

The couloir looked relatively broad but extremely steep. By mid-winter no-one had skied it. It was the kind of feature that made people say “You must be mad.” But my enthusiasm infected my friends and we waited for the snow to stabilize. We weren’t the only ones watching the mountain. Two days before a planned ascent, someone else tracked it. We were disappointed but still pleased we’d played it safe. A friendly French guide it said it would be the best day of our lives. Being first would have been just the icing on the cake.

Starting out early to reduce avalanche risk, we traversed right off the Courchevel 1850 Chanrossa chair. Below the couloir removed our skis and boards, checked are transceivers and began following a set of kicked steps. It was so much easier than breaking trail; I don’t know why would want to be the first up.

After eighty exhausting minutes climbing to 2800m, we reached an almost vertical face. After pausing for energy bars, drinks and the view, we kicked the snow from our bindings and clipped into skis and boards.

Simon shuffled onto his best side and paused. It was a long way to fall. His face froze as his body lifted and skis turned downhill. The snow cracked, he ignored it, concentrating on his edges. His body tipped forward as the heavy crust grabbed his ankles. Small slabs broke away, but the slope held. He found his rhythm and safely reached soft snow.

We followed one by one, the skiers in a tight-turn staccato, the boarders surfing more easily. Once past the crust the rest of the run was damn near champagne powder. My skis popped blissfully across the fall line, and whenever the pressure against my shins increased, I calved across to better snow.

Ahead, the boarders burst out of their glistening wakes, grabbing big air. With the rock walls flashing by, minutes past like seconds and as the powder hit my face, I knew nothing beat the rush of safely pushing your limits.

[Safety first: remember whether you are off-pisting one of the many French ski resorts, or any resort around the world, always wear a transceiver. Avalanches happen.]