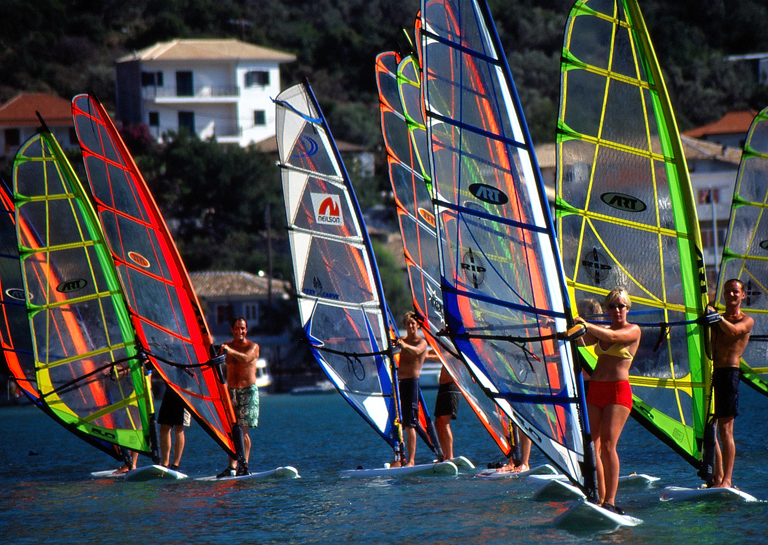 Far out to sea a dragonfly raced across the water. Nothing disturbed its play. It flew high into the air, landed perfectly and carved an exquisite tack. As it accelerated, I wondered what trick it would delight me with next. But suddenly the body was catapulted through its own wing. Calmly, a person levered themselves up onto the windsurfing board and began paddling the back to the shore, dragging the tattered sail behind them.

Half an hour later Beatrice reached the beach and walked coolly up to the director of Club Vass, took a sip of his exotic cocktail, and said “Sorry Tony, I need a new sail.” “No problem,” he replied, “We’ve got plenty.” Like a little kid I wanted to go and fetch one for her right now. I knew exactly where they were, I’d been coveting the massive expert rigs all week, every time I pulled out my stamp-sized learner on.

I’d never expected windsurfing to have this effect on me. I’d come for the mountain biking, but once at the resort thought I’d give it go, especially as ‘Eric’, the wind, was all everyone talked about. No-one could remember why it was called Eric. In fact no-one even knew why he blew, not even the University professors who visited every year to study him.

Greek Holidays Will Never Be The Same

Eric was a late riser, appearing in the afternoons, leaving a gentle breeze to blow onshore for the learners in the mornings.

For five days I let the clubs RYA qualified instructors guide my every move. Beam reach, close haul all . . . Lord Nelson eat your heart out.
Finally Nicky announced the magic words, “Meet me in the Boiler Alley”. I dragged my board through the shallows to the northern end of the beach where Eric blows the strongest and looked at Nicky expectedly. She smiled and said “Go for it”.

I performed a shaky beach start and then Eric cracked into the sail. My training kicked in and I yanked the sail back and jumped down the board. I glanced over my shoulder and the beach was already accelerating into the distance. I tried a tack and was catapulted over the front.

Once I’d got back on the board and checked the safety boat was still around I decided, “Sod it, no more turns.” All that mattered was getting on the plane — “Skimming over the water’s surface as a result of hydromatic lift,” that’s what Nikki said. All I knew was it was the fastest way to sail.

I straight-lined out to sea and hung on. The board began to feel light, its resonating boom began to quieten. I thrust my pelvis forward, wrenched the boom down and clipped into my harness. I lent further out and the plane was mine!

Greek holidays have so much more to offer than beaches and piss-ups, take a risk and try something new, and you’ll still have time for a few bevies at night. 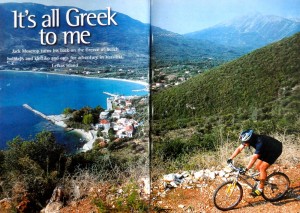