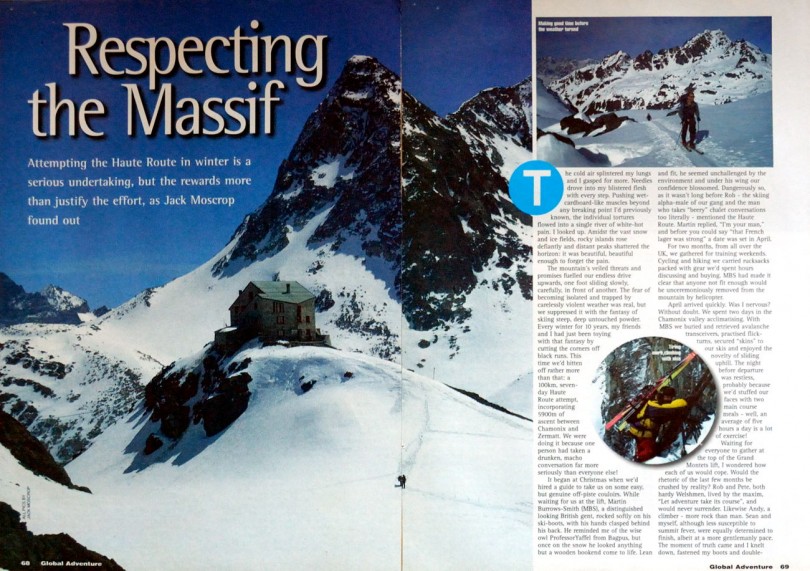 “Respecting the Massif” published in Global Adventure. Surviving the Haute Route, an Alps mountaineering ski tour from Chamonix to Zermatt.

The torn flesh of my bloodied feet screamed with every step. My calf, thigh, and back muscles alternated between spasms and feeling like wet cardboard. Cold air splintered my lungs and clenched a fist around my heart.

And yet I gasped for more, slowly sliding one foot in front of another, ever upwards, way beyond any breaking point I had previously known. We pushed deeper into the vast snow and ice fields, where rocky islands rose defiantly and distant peaks shattered the horizon.

The fear of becoming isolated and trapped by violent weather was real, but we suppressed it with the draw of skiing deep, untouched powder. It was the elixir that would make all the pain irrelevant.

For years, my friends and I had been cutting the corners off groomed runs, toying with the fantasy of being Big Mountain heroes. And now we were actually doing it: a sixty-mile, seven-day Haute Route attempt, incorporating 19,000 ft of ascent, skiing from Chamonix, France to Zermatt, Switzerland, and overnighting in high mountain huts.

…This full article is now available as part of a book called Snow Fever! Click here to get Snow Fever FREE!