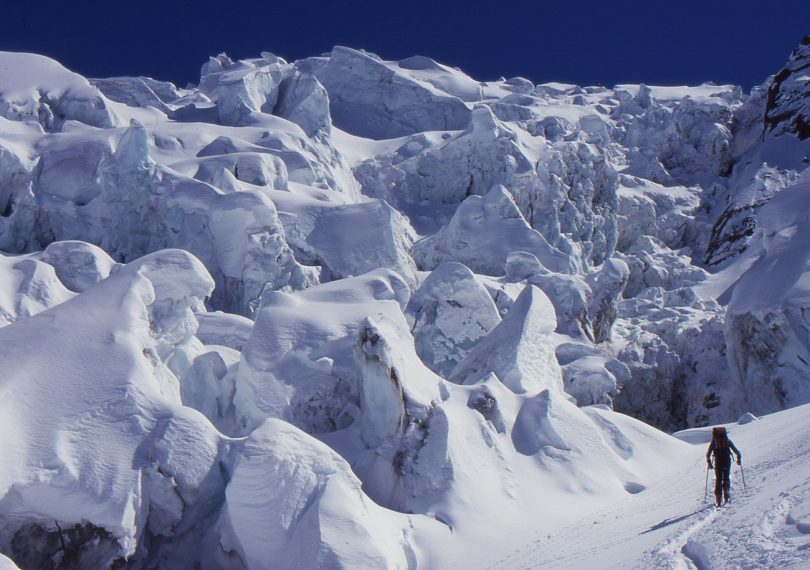 The scalding hot radiator in The Bulls Head in Glossop, Derbyshire, wasn’t warming me up. It had been a bleak December day, mountain biking one of Rob’s routes in the Peak District, man-handling our bikes through trackless peat bogs and thick heather in driving rain.

Pete returned from the bar with a round of drinks and handed Rob a Guinness. Rob took a long swig and set the glass down with a sigh of satisfaction. “We have to summit Mont Blanc this season,” he proclaimed.

I wrapped my chilled hands around my cup of tea. “It’s a pointless slog. Two days of agony at altitude, for what?”
“The achievement. It’s the highest peak in Western Europe. Four thousand eight hundred and ten metres of pure glory.”
“There are far prettier mountains with better ski touring and fewer people,” I pointed out. “We’ve never done Monte Rosa, for example. It’s only two hundred metres lower.”
“Exactly! Lower,” Rob said, and turned to Pete. “What do you think?”
“I agree with you, Rob. The highest Alp first.”

I knew he would. Pete dreamed of climbing ‘The Blanc’ before his fortieth birthday. An English-Welsh border rover with Tom Jones good looks, he viewed everything in life with a dangerous level of optimism. Rob was even worse: an impulsive red-headed Welshman who embraced challenges with real Celtic fervour. My origins were distinctly English, with the associated reserve – unless speed was involved, when all inhibitions would vanish. We constituted a very unsafe team, but despite having skied together for ten years, we hadn’t had a major mishap. Yet…

…This full article is now expanded and available in my book Blue Ice, White Powder. Get it FREE here!