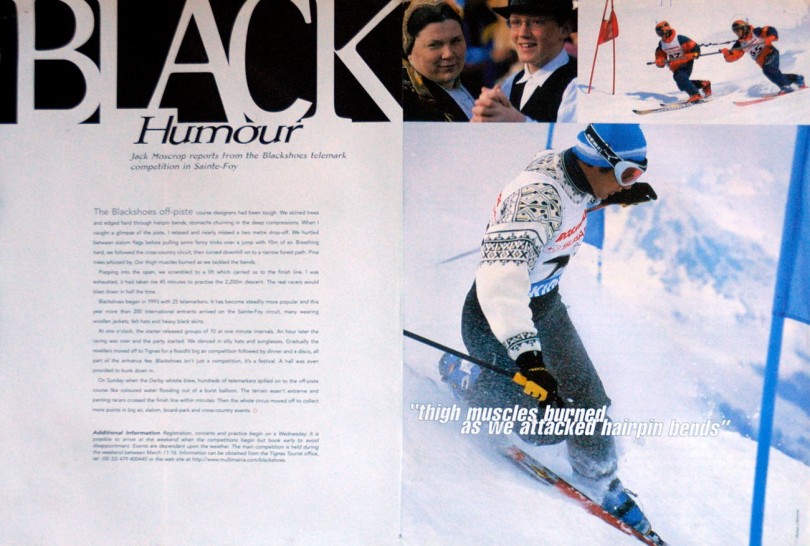 “Black Humour” published in Ski and Board. A traditional telemark skiing festival in St Foy, France, with slalom, downhill, on and off-piste skill tests, big air and,  of course, a bigger party.

The black shoes off-piste course designers had been tough. We skirted trees and edged hard through hairpin bends, stomachs churning in the deep compressions. When I caught a glimpse of the piste, I relaxed and nearly missed two meter drop off. We hurtled between slalom poles before pulling some fancy tricks over a jump with ten meters air. Breathing hard, we followed the cross-country circuit, then turned downhill onto a narrow forest path. Pine trees whizzed by. My thigh muscles burned as we tackled the bends.

Popping into the open, we scrambled to lift which carried us to the finish line. I was exhausted, it had taken me 45 minutes to practice the 2200 m descent. The real racers with blast down in half that time.

A Telemark Skiing Must Do

Blackshoes began in 1993 with 25 telemarkers. It has become steadily more popular and this year more than 200 international entrants arrived at the St Foy circuit, many wearing woollen jackets, felt hat and heavy black skirts.

At 1 o’clock, the starter released groups of 10 in 1 minute intervals. An hour later the racing was over and the party started. We danced in silly hats and sunglasses. Gradually the revellers moved off to Tignes for a floodlit big air competition followed by dinner and a disco, all part of the entrance fee. Black shoes isn’t just a competition, it’s a festival. A hall was even provided the bunk down in.

On Sunday when the Derby whistle blew, hundreds of telemarketers spilled onto the off-piste course like coloured water flooding out of a burst balloon. The terrain wasn’t extreme and panting racers crossed the finish line within minutes. Then the whole circus moved off to collect more points in big air, slalom, board-park and cross-country events. Definitely a ‘must-do’ festival if you’re into free heeling.