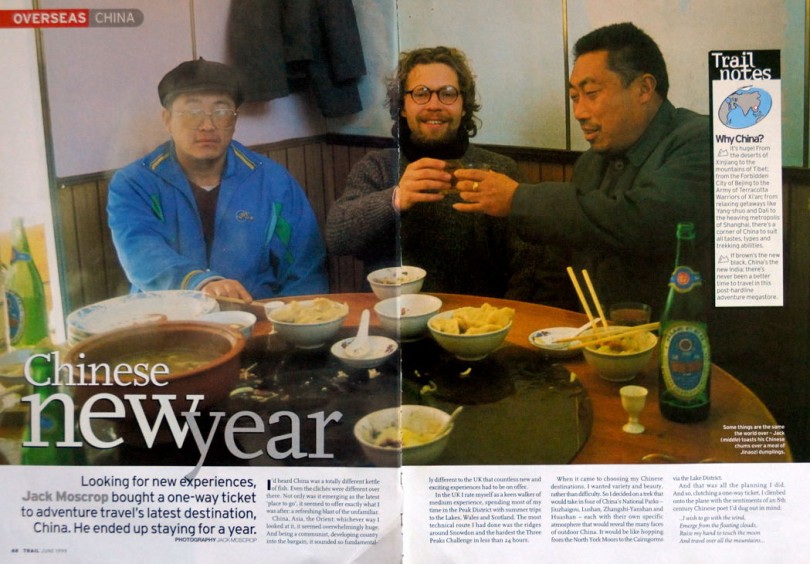 The road to Juizhaigou opened in April, when the snow cleared from the high passes. My three-day bus journey snaked its way along roads which had partially collapsed into rushing rivers far below. On an overnight stop, I asked “What time does the hot water come on?” The landlady looked confused, and replied, “May”. I was pleased: it was another reminder, among many, but I had escaped my civilization.

Jiuzhaigou go is part of a Buddhist region on the edge of Tibet, where local faces looked more European than Oriental, and people wore long sleeved overcoats made from up to 8 sheepskins. Black and orange stones and beautiful silk decorated their fur hats. They passed by, moving beads through their fingers, chanting prayers.

In the rivers of the park’s lower elevations waterwheels sent constant prayers to the gods, while waterfalls gushed through the roots of wooded knolls. Most of the small settlements and hotels dotting the road in were a pleasing mix between the ragtag functionality of Welsh hill farms and the primness of Alpine huts. The tarmac split into two dirt roads which climbed into the park’s heart, leaving habitation behind . . .

Lushan, a single mountain massif thrusting out of fertile plains, intrigued me with landmarks such as Five Old Men Peaks, and Black Dragon Pool. Like the Lake District, it is famous for the inspiration is provided nationally acclaimed poets. A less favorable comparison is the crowd. In June it was mobbed like a bank holiday on Striding Edge.

The Chinese tore around in minibuses, falling out of them like ‘Keystone Cops’ to merrily hustle their way along paved paths, harangued by the megaphones of numerous photographers offering souvenir pictures in fancy dress. In front of noteworthy landmarks, punters posed in emperor’s gowns, while others sat nervously astride nonchalant camels. Adding to the drama, nouveaux rich were carried up long, stepped paths by palanquins. Not the serene trekking I’d expected, but fascinating nonetheless . . .

Two Chinese friends, Faye and Amber, invited me in a Canadian kung-fu student to visit Zhangshi mountain. It was the perfect opportunity to travel in China with our unofficial guides running the gauntlet ticket offices and hotel receptions. I prepared myself for a thoroughly relaxing time.

Making a pleasant change from the countless rooms of cheap hotels, we arrange accommodation in villager’s house. Austere, 1950s pictures of Communist Party leaders decorated the girls room while ours, ran to more risque recruitment posters depicting heavily made up young women in military uniforms. The grey stone house followed the traditional architecture of single-storey rooms, surrounding a square courtyard centring on a water trough, where we could wash . . .

Huashan is a sacred Taoist mountain. Taoism is one of China’s ancient religions and, looking for spiritual enlightenment, we read the local mountain rules. We were pleased to note, “1. You should love and cherish the mountain”. Point 2, however, took us a little by surprise, “2. You should not engage in gang fights”.

Undaunted we began on a concrete path running along a river. Rusty chains and footholds cut out of vertical cliffs led to cave dwellings hundreds of feet the above us and judging by the washing outside, they were inhabited. Then the steps began.

Often the rock stairs ahead were lost among huge rock faces, cutting across each other like a house of cards frozen in mid-fall. Just when the scenery turned from distraction to oppression, a little Taoist Temple would appear, perched on the edge of a precipice or along the ridge magically breaking the steps spell . . .