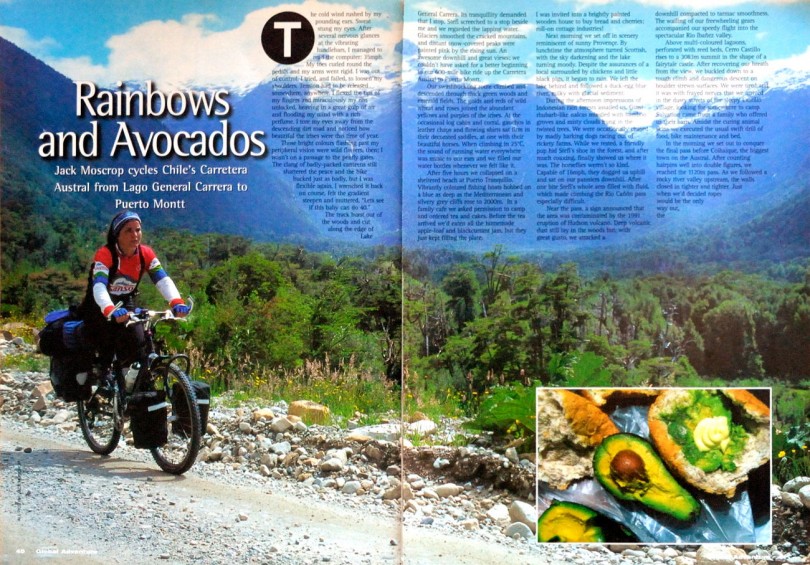 For the next 230 miles the Carretera Austral became a frontier of soaking green jungles and high passes separating small villages, some dominated by German-speaking settlers, others Spanish. Negotiating the passes was both heaven and hell. Often we had to push our 25kg loads up impossible gradients before we could let loose on the 20 mile descents.

Like light aircraft we swooped down the steep switchbacks, overlooking jungle valleys which Tarzan could have called home. Crossing flooded rivers, we passed through mountainous towers and glimpsed ultraviolet glaciers hanging among the forests. 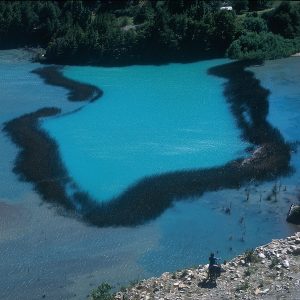 However the weather was cruel and dark clouds fueled a constant deluge of rain storms. Men, hunched in drenched ponchos and sheepskin trousers, looking like Wild West sheriffs and Cornish tin-miners, stopped their sulky horses and told us that the rising moon was to blame. Amidst that smell of damp decay, we sheltered under trees or were merrily invited into cabins, where our clothes steamed next wood-burning stoves while we slurped maté. Once we stayed in our tent for two days solid, eating ice cream in a perverse ritual of defiance.

Immense rainbows heralded the clouds intermittent retreats, breaking the monotony and claustrophobia of poor visibility and encroaching greenery. During such respite, a world which had stopped turning miraculously burst into life again. Frogs began croaking in the lakes and hawks mewed across the forests. While I fished, swallows bathed in the puddles, hummingbirds hovered in the bushes and ducks held out their wings to dry.

On the road we met other cyclists and, like Bedouin, shared cups of tea and stories of other travelers or tips on the conditions ahead. Some were bike touring 20 miles a day, others 70; there was no right way to ride the Carretera Austral, but we all shared respect for a couple traveling the rough roads on a tandem.

We camped on the black beach of Santa Barbara and watched the sun dissolve into the sea. At dawn steam rose off the lapping waves. Instead of Hawaiian beach bums, dolphins, cormorants and otters played in the surf while a volcano appeared above the clearing clouds. We pulled on our shorts and cycled through 2000 year old Alerce forests. After passing the ice-capped 3120m Michinmavida we stop to watch dragonflies hunting on Lake Rio Blanco. A solitary American appeared out of the undergrowth carrying a fly rod and looking frustrated.
“Not biting?” I asked.
“They are,” he replied, “But a 3ft trout is too big for supper.”