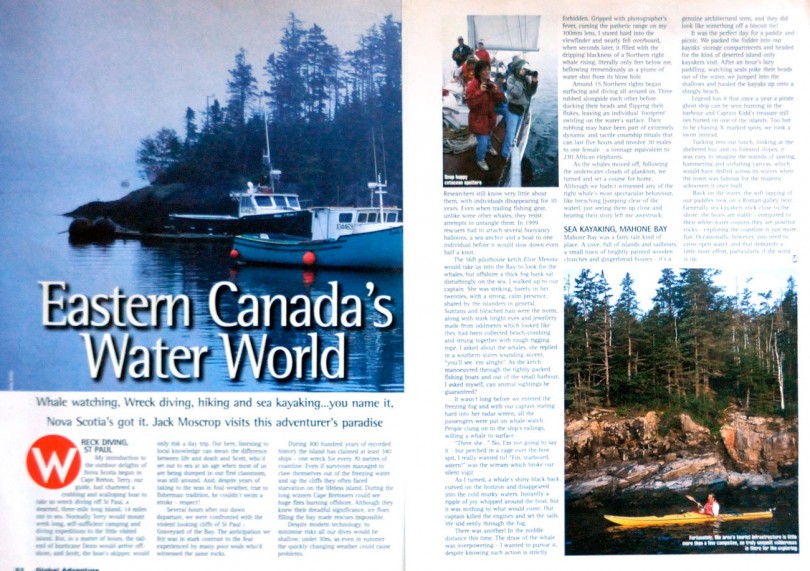 “Eastern Canada’s Water World” Published in Global Adventure. To sea kayak Canada, I mean around the whole of Canada is a mission which plays on my mind as a true adventure but with only a day available I had an incredible taster – including the dulse seaweed – before breakfast in New Brunswick.

Picture yourself sitting comfortably. The only sound is the soft scooping water. Your breathing and heart rate are relaxed. You are in complete control and free to float off in any direction you please. No, it’s not Zen meditation, it sea kayaking.

Mike, my guide, and I sat in our kayaks waiting for the sun to rise and listening to loons calling across McLaughlin Cove’s calm waters. Mike pointed to promontories named after the ships that wrecked. “A coal cargo went down there,” he said. “In the Caribbean its diamonds and gold. Here it’s coal and grindstones. That’s Atlantic Canada for you, tough,” he chortled. “Still the fishermen stayed warm that winter.”

And yet that toughness hasn’t translated into machismo or brutality. The Atlantic Canadians are approachable and hospitable, qualities perhaps rooted in communities used to facing adversity together. But they certainly aren’t dour; their quirky and teasing humour is very British. They also share a long heritage of piracy. Under ‘licence’ from the British authorities they plundered French, Spanish and Yankee shipped as far south as the French Caribbean. They were blockade runners during the American Civil War and smuggled rum during Prohibition. When locals talk about their seafaring grandparents, they hint romantically about secret hideaways still existing in the houses and the connection to the dubious ‘trade’.

As the sun turned the water pink and orange, we paddled past granite cliffs streaked with red slate and white gypsum. The swirling formations created sculptures of porpoises, fossilised trees and Indian’s heads. Stopping to admire the deserted coastline, Mike pulled out a pouch of dulse; I been dying to taste the local specialty seaweed and took a large handful. A quizzical smile crossed Mike’s face. As I started chewing, I knew why: the salty seaweed’s raw fishiness made me choke, but just as if I taken too larger bite on a Mexican chilli pepper, I had to keep chewing. Now all I needed was barnacles stuck to my forehead and I’d have been a real sea dog.

Mike had a much better idea though, “Let’s head back for blueberry muffins and maple syrup pancakes.”