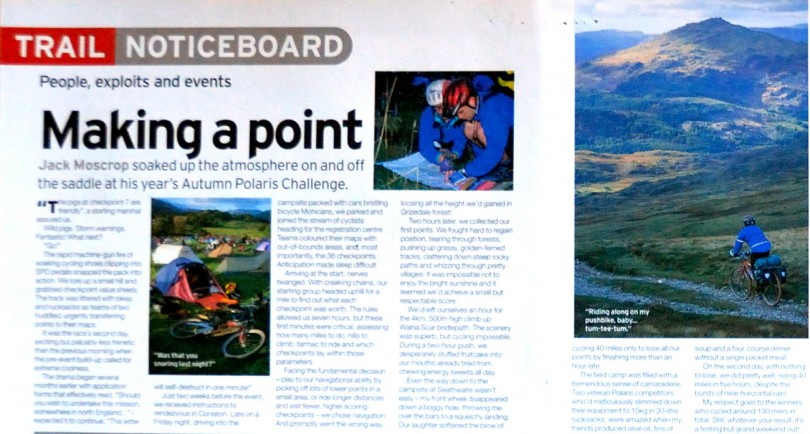 “Go!” shouted the starting marshal and the hundreds of cleats snapping into pedals sounded like machine gun fire. We tore up a small hill to grab the checkpoint value sheets. The track was littered with bikes rucksacks as teams of two huddled, urgently transferring points to their maps.

The event location had been kept secret until two weeks before, when we received instructions to rendezvous Coniston. At the Friday night registration we’d marked the outbound areas, and, most importantly, the 36 checkpoints. But only now, once the clock was ticking did they give us the check point values which we would have to use to plan a race strategy.

We had seven hours to gather as many points as possible. We could either visit lots of close low value check-points or go for the high-scorers miles away. It boiled down to whether you we were a stronger map reader or rider.

Taking into account the big gradients in the Lake District, we chose to play on our navigation skills and promptly went the way.

Two hours later, we collected our first points. We fought hard to regain position, tearing through forests, pushing up grassy, golden-ferned tracks, clattering down steep rocky paths and whizzing through pretty villages. The sun shone brightly and it seemed would achieve a small but respectable score.

We’d left ourselves an hour for the 4 km, 500m climb up Walna Scar bridle path. The scenery was superb, but cycling soon turned into a two-hour push. Even the way down to the campsite at Seathwaite wasn’t easy – my front wheel disappeared down a boggy hole and threw me over the bars.

We’d reached the point where both my partner and I had to laugh. Even when we arrived an hour late and lost all our points, despite riding 40 miles.

In the campsite competitors had slimmed down their equipment to 15kg in 30L rucksacks. They were amazed when my friends produced olive oil, tins of soup and a four course dinner without a single dehydrated meal in sight.

On the second day with nothing to lose we did pretty well, riding 40 miles in five hours, despite the bursts of horizontal rain. My respect goes the winners who cycled 130 miles in total, but however well you do, if you enjoy a combat ride then this type of competition is for you.