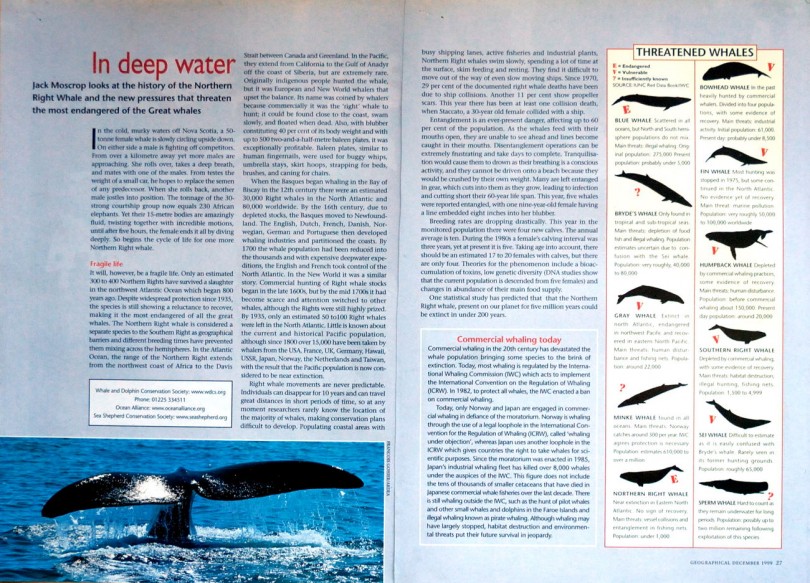 “In Deep Water” published in Geographical. Exposé on the most endangered of the large whales, the Northern Right Whale, which summers in the Bay of Fundy.

In the cold, murky waters of Nova Scotia, 50 ton female whale is slowly circling upside down. On either side males fight off competitors. From over a kilometer away yet more miles are approaching. She rolls over, takes a deep breath, and mates with one of the males. From testes the weight of a small car, he hopes to replace the semen of any predecessor. When she rolls back, another male jostles into position. The tonnage of the 30 strong courtship group now equals 230 African elephants. Yet their 15m bodies are glide and turn together with incredible elegance, until, after five hours, the female ends it all by diving deep. So begins a cycle of life for one more Northern Right Whale.

It will, however, be a fragile life. Only an estimated 300 to 400 Northern Right Whales have survived a slaughter which began 800 years ago. Despite widespread protection since 1935, the species is still showing a reluctance to recover, making it the most endangered of all the great whales.

Its name was coined by whalers because commercially it was the ‘right’ whale to hunt; it could be found close to the coast, swam slowly, and floated when dead. Also, with blubber constituting 40% of its body weight and with up to 500, 2.5m baleen plates, it was exceptionally profitable.

When the Basques began whaling in the Bay of Biscay in the 12th century there were an estimated 30,000 Right Whales in the North Atlantic and 80,000 worldwide. By the 16th century, due to depleted stocks, the Basques moved to Newfoundland. The English, Dutch, French, Danish, Norwegian, German and Portuguese then developed whaling industries and partitioned the coasts. By 1935 only an estimated 50 to 100 Right Whales were left in the North Atlantic. Little is known about the current and historical Pacific population.

Right Whale movements are never predictable. Individuals can disappear for 10 years and can travel great distances in short periods of time, so at any moment researchers rarely know the location of the majority of Whales, making conservation plans difficult to develop.

Since 1970, 29% of the documented Right Whale deaths have been due to ship collisions (because they spend so much time on the surface). Entanglement is also an ever present danger, affecting up to 60% of the population (because they feed ‘blind’ swimming with their mouths wide open). Disentanglement operations can take days to complete. Using tranquillizers would cause the whales to drown as their breathing is a conscious activity, and they cannot be driven onto a beach because they would be crushed by their own weight. Many left are entangled leading to infection, cutting short their 60 year lifespan.

Breeding rates are also dropping drastically in the late ’90’s the monitor population had four new calves. The annual averages 10. Also calving interval had increased from 3 years in the 1980’s, to 5 years in the late ’90’s. One statistical study predicted that the Northern Right Whale, present on our planet for 5 million years could be extinct in under 200 years.

In the summer, the Bay of Fundy, on Canada’s east coast is a great place to see the Northern Right Whales, along with Minke Whales, Humpback Whales and Finback Whales.